In Ireland, February 1st is known as Imbolc (which means “in the belly”). It is also the Feast of Bridget, a celtic goddess and saint, loved by all you know her. It is my wish that Bridget be known to you too.

I first met St.Bridget when I was twelve years old. I went to Catholic school where everyone made their confirmation in 7th grade. This is a sacrament in Catholicism where the Holy Spirit is said to descend upon you - a pretty big deal for a 7th grader.

For your confirmation you get to choose a confirmation name, which is supposed to be in honor of a saint that you admire, and want to emulate. Most girls wanted a name that they thought was cool, and went out of their way to find a connection to a saint that had some resemblance to the name. I was a little embarrassed back then about the name I chose, because I didn’t particularly think it was cool, but Bridget called to me. Bridget is my mother’s name, it was also two of my great-grandmothers’ name. I also knew that St. Bridget was second only to St. Patrick in being a patron saint of Ireland. Being an Irish-American growing up in the Bronx, New York, my Irish-ness was something I was very proud of (until I moved to Ireland after 8th grade where all the Irish girls let me know in no uncertain terms that I was not Irish at all - I was a Yank!).

So Bridget it was. At that time I had to write, what seemed like the longest essay of my life, about her for Fr. Peter, who undertook the confirmation day training like an army sergeant. It was all so strict and terrifying. The only things I remember about Bridget, from that time and research, was that she performed many miracles, and she always had wolves near her.

Years later, when I stared exploring Celtic mythology, I discovered that long before Bridget was a saint, she was a powerful Celtic Goddess. So powerful, that Christianity adopted her, and bestowed many of the same characteristics on the saint. 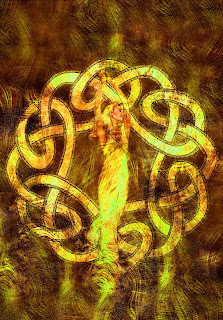 Today, she is celebrated as saint and goddess, on Imbolc -  also known as the first day of Spring from ancient celtic times. She represents the Divine Feminine and is revered as a Fire Goddess. Bridget is celebrated for helping us cross over the dark nights of winter into the promise of rebirth with Spring. What I love most about Bridget is that she represents “bridging” the gap between the light and the dark. She symbolizes feeling “safe” in not knowing, in trusting yourself, life, and a higher power, when you do not consciously “know” what is going to happen, or what to do next.

She is invoked by those in search of new beginnings. She is also known as the patron saint of midwives, poets, healers and craftspeople - and all those birthing new ideas into the world. She can help you birth new ideas about yourself too. Call upon her flame to inspire you into action.

* What fire is burning in your belly?
* What desires do you wish to bring out of the darkness and into the light?
* What if your biggest desire was to release the shame, guilt and feelings of unworthiness and low self-esteem that you have been carrying around for decades?

This is the time to ask for help and support in releasing the old stories and identities that dishonor your soul. But first, we have to stop denying that we are carrying them. Then, with fierce compassion and resolve, we have to be willing to stop identifying with being the victims of our past. Your true self is longing to emerge.

In honor of Imbolc and Bridget why not light a fire, or a candle, and ask for her help in releasing self-limiting beliefs, so that you can shine even brighter than you already do. You are worthy and lovable right now.

Here is a beautiful song, “Imbolc” by Lisa Thiel, to help you celebrate the light shining inside of you. Some of the lyrics are:
“Blessed Bridget, queen of the fire
Help us to manifest our desire
May we bring forth all that’s good and fine
May we give birth to our dreams and desires.

Happy Imbolc! The days are getting longer, the promise of Spring is here.

Posted by Pasha Hogan - Creative Recovery™ at 12:00 AM