I have always been intrigued by the opening lines of David Whyte’s poem Tilicho Lake:

“From this high place it is as simple as this
Leave everything you know behind.”

I don’t know about you, but I don’t think that “leaving everything you know behind” is a simple thing. In fact, it is virtually impossible without a strong spiritual practice and the intervention of grace. However, we can start by leaving behind what we know no longer serves us. The habits, negative self talk, desires, attachments, fears and seductive memories that keep us stuck in the past, living half a life and wondering why we are not moving forward.

Since I can remember it has been my nature, or at least what I thought was my nature, to want to accumulate experiences and to expand. Often I’ve learned the hard way, that I can’t bring everything with me, or experience everything all at once. My lessons have ranged from being charged “excess baggage” on flights, to clinging on to relationships and lifestyles that were simply no longer in alignment with the path of my soul.

Expansion can’t happen without first letting go. Neither can moving forward into a new life. We must be willing to surrender what we think we know, in order to create room for what we don’t know. Historically, my letting go has not been smooth – “kicking and screaming” would be a better way to describe the process. On reflection, it has been my resistance to letting go that has caused me the most suffering. I see this when I work with people too and I often hear things like, “ But it’s too painful to let go!”

The Indian sage Sri Nisargadatta Maharaj has some wise words to offer on this subject:

”Pain is physical; suffering is mental. Beyond the mind there is no suffering. Pain is merely a signal that the body is in danger and requires attention. Similarly, suffering warns us that the structure of memories and habits, which we call the person, is threatened by loss or change. Pain is essential for the survival of the body, but none compels you to suffer. Suffering is due entirely to clinging or resisting; it is a sign of our unwillingness to move on, to flow with life.”

Today may be the day to inquire into your own suffering. What thinking, habits or people are you resisting letting go of? Do you know? My guess is that you probably do know, but the resistance to admitting it is so great, that we often settle for something safe, even if it doesn’t feel right.

Ten years ago I was at a U2 concert at Slane Castle in Ireland when I realized just how powerful the message “Leave It Behind” could be. To follow is a brief excerpt from my forthcoming book describing the experience:

All the lights were turned down, it got strangely quiet, and out of the silence and darkness, the words: “Leave it behind, Leave it behind, leave it behind, leave it behind, LEAVE IT BEHIND, LEAVE IT BEHIND, LEAVE IT BEHIND………”  burst out into the crowd, from the screen behind the band. I stood still, dumbfounded, staring at the words. They caught me off guard and I let them pour into me. I felt as if God had opened up the sky and delivered me a personal message, in spite of the 80,000 people who were also there. Then Bono started slowly singing, “And I know it aches and your heart breaks, You can only take so much….Walk On.” Then the whole crowd started singing “ALLELUIAH!”, over and over again like a mantra. That was it for me. I swear it was one of the strongest and clearest spiritual awakenings I had ever had in my entire life and it didn’t happen in a temple or in a church or while I was meditating. It happened, in the middle of a field, at a rock concert.
Tears started streaming down my sunburned and freckled face. I knew it was time for me to walk on and into the next part of my life and leave behind the way I thought my life was supposed to look like. It was time to walk on and leave behind all the ideas I had constructed over my life of whom I was and what I thought I had to do to be happy and successful. Leave behind the idea that I had to do anything just because I put a lot of time and energy into it and just because I thought I should or somebody told me I was good at it. Leave behind the concerned and disapproving looks of friends and family who only wanted what was best for me. The only thing I couldn’t leave behind was my heart and my intuition, which I had started to value, trust and listen to more than ever. It was time to leave behind playing it safe.
That experience contributed in changing the course of my life. It wasn’t a one off deal though. The process of letting go and leaving things behind is ongoing. It is easy to get caught up in more suffering as soon as we think we have already let go; only to discover we are now clinging on to a new idea of how life is supposed to go!
Nature mirrors this to us in a beautiful way. Right now the aspens, high in the Sangre De Cristo Mountains in Santa Fe, are turning from green to yellow. This magnificent display will only last for a few weeks before the leaves fall to the ground, forming a golden carpet along the steep and winding mountain trails. The discarded leaves will nourish the soil for new life to follow. It is hard to imagine that beauty will appear again from the lonely looking naked branches. But it will – that is the promise of nature.

That is promise at the end of the opening poem too:

“Those who come with empty hands will stare into the lake astonished. There, in the cold light reflecting pure snow, is the true shape of your own face. “
Some things to ponder:
Where in your life are you playing it safe?
What attitudes or beliefs are no longer serving your highest self?
What do you imagine it would look like if you just let go? 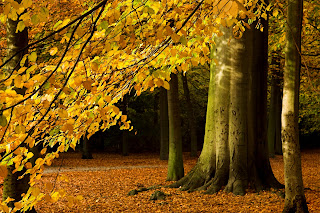