Every Easter weekend thousands of pilgrims and travelers, of all denominations, descend on the small village of Chimayo, nestled in the hills of northern New Mexico. A chapel was built there in 1816, in honor of the miraculous healings that were reported to have taken place at the site. It is affectionally known as the "Lourdes of the Southwest."

Last Friday, after an upsetting phone call with a dear friend, I spontaneously hopped in my car, and drove the 30 miles from Santa Fe, to check it out for myself. I was in need of some healing. Although I have been to the Santuario de Chimayo many times, I have never been there on Good Friday. As soon as I hit the highway, I saw dozens of cars parked on the side of the road. All abandon by pilgrims that had decided to walk the whole way. 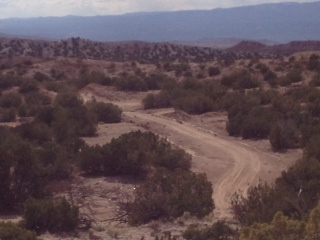 "Watch for Santuario Walkers" signs were placed along the highway, which was also speckled with temporary, bright blue restroom cubicles. Tables appeared every few miles, stocked with water, oranges, and other provisions for the walkers. I had heard that no one asked for money. Local families often set up the tables, as an offering of support to the pilgrims. The sight of so many people, all ages, colors, shapes and sizes, walking with the destination of blessings in mind, brought tears to my eyes. I drove in silence, only breaking it to whisper my mantra to myself. I wanted to be a part of the devotional energy I felt, even though I was driving.

When I turned off the highway, many more cars were abandoned in the ditches and surrounding fields. Now there were hundreds of people filling the winding and narrow road, as well as cars, that were traveling in the same direction at a snails pace. Some people were walking by themselves, others were in groups. Some pushed strollers or wheelchairs, while others spoke on their cell phones. Some wore t-shirts, displaying a photograph of a departed loved one on the back, others wore string vests and shorts, displaying their tattoos and jewelry. Everyone was walking for a different reason. There was room for all of it in the desert landscape.

A few miles outside of Chimayo I too abandon my car. I wanted to walk. I wanted to let go of the anger, disguising the hurt, I felt earlier when I hung up the phone. I prayed for understanding, forgiveness and the grace to let to go of the situation with love - instead of anger. When I reached the chapel, I got down on my knees and cried. I was not alone. Kneeling before me, was a young man in his twenties, his arms and legs covered in tattoos, his broad shoulders shaking, while his tears steadily flowed. Behind me I could hear a mexican family, jovially speaking to each other in Spanish, as they lit a candle together. 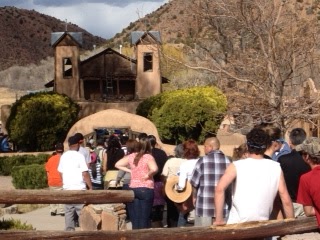 It occurred to me that none of us were that different. Each one of us may have started our walk from a different place, but for each of us the destination was the same…..love.

What burden do you want to lay down? What part of your heart wants to rise up and be known?

You can create your own pilgrimage by walking out your front door, with the intention to release, receive, and return - slightly altered, and changed in some way.

It's a few days later, and I still haven't talked to my friend. I pray that when we the time comes for us to talk, I will be able to listen, and to speak, from an open heart, instead of a wounded one.
Posted by Pasha Hogan - Creative Recovery™ at 2:41 PM